Is that a word that scares you? Is that something that makes you run in the opposite direction? Do you wish you had the skills to handle conflicts better?

If you are like most people, you are no fan of conflicts and have often been caught up in the maze of a conflict. I certainly have, and I can honestly attest that conflict (or the fear of it) has given me many sleepless nights.

In my 12 years of professional life, I have spent many a moment amidst conflicts, and many more reflecting upon them. Why do they happen? How can I best handle them? Can I still achieve my goals and enrich my relationships with conflict all around me? Can I beat the stress and anxiety which comes with conflict and still be happy and peaceful? Can I deal with conflict in a way that I can be proud of?

There has been wise advice shared with me which I have ignored out of arrogance or ignorance, only to stumble upon and be humbled by the same realization later. Over time I have written down some notes which I have referenced later in times of conflict. This article is the first in a series of articles I am writing from these notes which revolve around the subject of handling conflict in our professional and personal lives.

Human Beings Do Not Think or Feel Alike. Conflicts are Natural.

Conflicts are a natural order of life, and if we step back and see the bigger picture, there is nothing unexpected around them. They are inevitable when we work with people who speak different languages, come from different cultures and countries, and have different values and beliefs.

Today we live in a world driven by democratic and secular values (in most countries). If you don’t see any conflicts, perhaps people are not speaking up enough, and that I believe is a bigger problem for any society or organisation.

In democratic societies, differences of opinion are not only expected but it is also a duty of each citizen to express himself without fear or hesitation. I believe that having diversity in thought is a strength, and knowing how to manage conflicts becomes a critical skill to learn if we are to live and work in such an environment. 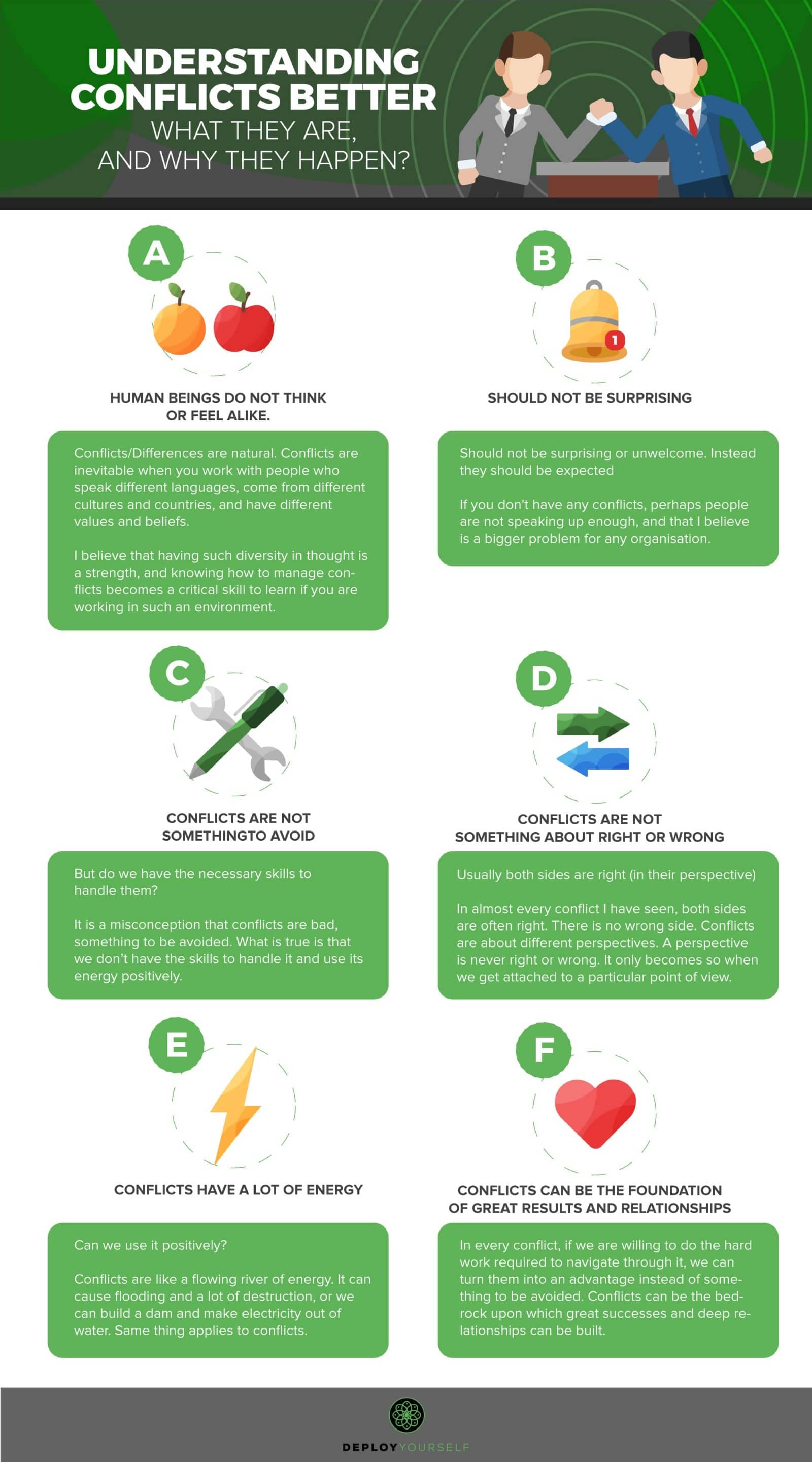 Are Conflicts Bad? Or Do We Lack The Skills To Handle Them?

After facing and trying to avoid many conflicts over the years, I have come to believe that conflicts are not bad or something to be avoided. However, it is a common misconception and I have seen people do anything to avoid them.

We have no choice or power over when a conflict is going to present itself. Our only choice is in responding to them. We find them undesirable or unproductive not because they are unpleasant but because we have no idea about how to handle them.

Conflicts Are Not About Right or Wrong. Usually Both Sides Are Right.

In almost every conflict I have seen, both sides are right. There is no wrong side. Conflicts are about different perspectives, and each perspective is valid for the one holding it. A perspective becomes right or wrong only when we get attached to a particular point of view.

Can we see that we are all seeking to express the truth as we see it? Can we acknowledge that everyone sees the world differently and form their own perception of events? Conflicts happen not because of different perceptions, but because of our inability to acknowledge another’s point of view.

Conflicts Have A Lot of Energy. Can We Use It Productively?

Conflicts are like a flowing river. If left unchecked, they can cause flooding and destruction. But if we can build a dam and channel the water in the right direction, we can turn it into electricity.

The same thing applies to conflicts. The only question is – Can we use the energy in conflict productively? Can we channel this energy into productive conversations that can lead to creative solutions and better results?

However, if we can’t control the energy in a conflict, it can result in damage (stress, frustration, bad results) and lost opportunity.

Conflicts Can Be The Foundation for Great Results and Relationships.

Healthy disagreement creates friction and energy. If we look back at history we will find that every great accomplishment has come out of differing opinions of people who have found a way to work together.

In every conflict, if we are willing to do the hard work required to navigate through it, we can turn them into an advantage instead of something to be avoided. Conflicts can be the bedrock upon which great successes and deep relationships can be built.

“An enemy is a person whose story we have not heard.” – Gene Knudsen Hoffman

In the next article, I will share a few things which most of us have done in the past amidst a conflict, but which I have learned that we MUST NOT DO when we encounter a conflict.