Focus on Interests, Not on Positions – The One Tip Which Can Make Every Conversation More Productive

There was once only one orange left in a kitchen and two chefs were fighting over it.
“I need that orange!”
“Yes, but I need that orange as well !”
Time was running out and they both needed an orange to finish their particular recipes for the dinner. They decided on a compromise: they grabbed one of the large kitchen knives that was lying around, split the orange in half, and each went to his corner to finish preparing his meal.
One chef squeezed the juice from the orange and poured it into the special sauce he was making. It wasn’t quite enough, but it would have to do. The other grated the peel and stirred the scrapings into the batter for his famous cake. He too didn’t have as much as he would have liked, but given the situation, what else could he have done ?

We all love to form, hold, and defend our positions. Whether it is at home with our spouse, or at work with our colleagues, once we form a position on a certain topic, it is going to take some convincing to loosen our hold on our “coveted” position. Isn’t that true?
As human beings, we function and operate in this world by forming positions on different subjects we face in our day to day interactions. However, when we encounter opposition or resistance to our point of view, or when we oppose others’ points of view, it is very common for us to defend our positions and it takes some convincing for us to yield from our position.
What I have discovered with my experience of dealing with people over the last many years is that if we focus on people’s interests instead of their positions, it can become much easier to negotiate and converse with them. To clarify my point, and to understand the difference between positions and interests, consider the three points (and corollaries) below.
1. Positions are WHAT You Want. Interests are WHY You Want It.
In the story above both chefs wanted the orange, and that was their position. What you WANT, the specifics and details of it, is your POSITION. One chef wanted the orange for its juice to prepare a sauce while the other for its peel to prepare a cake. This was their INTEREST behind wanting the orange.
Corollary 1
Focusing on positions puts us against one another, which is not a good start to any conversation. On the other hand, distinguishing between the positions and interests helps us discover people’s common desires – like fairness, accomplishment, happiness and prosperity. These desires might not be same for both parties, but they often are compatible, which makes for easier negotiation. 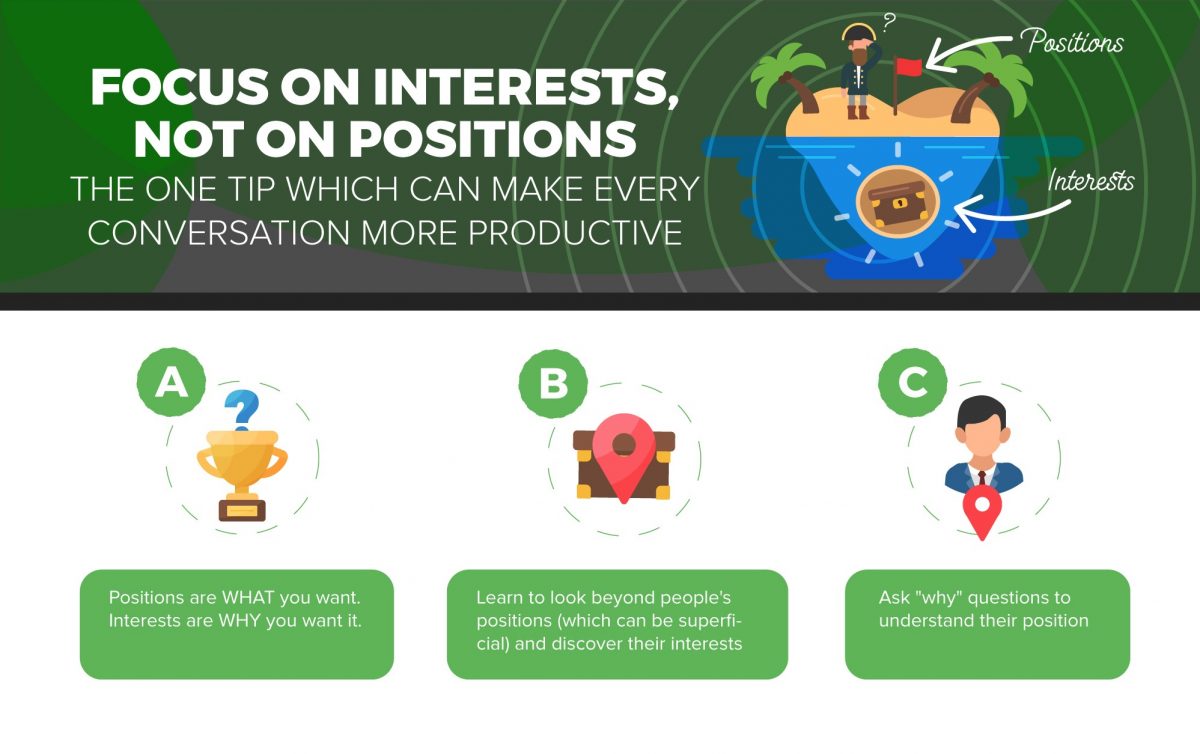 2. Look Behind Superficial Positions To Discover People’s Hidden Interests.
The positions we form can be, and often are, superficial in nature. Considering the above story again, it is obvious now that it would have been better for the chefs to peel the orange and take the part they needed for their respective recipes. However, they choose to focus on each other’s positions (the what) and hence ignored their interests (the why).
Corollary 2
When we focus on positions, our EGO gets involved which makes it difficult to move ahead. Looking to discover each other’s interests helps us to understand each other better. It presents an opportunity to collaborate and work together to produce not just better results, but also better relationships.
3. To Uncover Interests, ask “WHY?”
In the above story, what the two chefs got was an undesirable compromise, and I am sure their relationship didn’t get any better because of this.
It is very easy to form positions as human beings, but it is always helpful to ask ourselves why we want what we want. Asking this question can help us discover our hidden interests, which can then lead to many flexible alternatives instead of just one fixed position.
Corollary 3
Focusing on positions alone can lead to unpleasant arguments and/or undesirable compromises. Understanding each other’s motivations behind the positions can lead to win-win situations. It can make 2+2=5 happen.
Conclusion
It is very common to confuse positions and interests. When we act in a “my way or the highway” manner without considering the views of the other side as legitimate, it becomes very difficult to make progress in conversations. Negotiating in this way can do more harm than good, as people tend to dig-in with their opinions and justifications, and their positions tend to move further apart.
However, looking to work together by asking the “Why?” question, and taking efforts to understand each other’s concerns can create a pathway where there was none before. It can result in a partial solution in a not-so-ideal case, and it can allow for magic (any solution better than what both sides wanted initially) to happen in the best case.