This is a story that can change the way we think about leadership. This story of a United States Navy Captain David Marquet who transformed a dissatisfied submarine crew into a formidable and respected team gives us insights about how strong leadership can make a big difference to an “underperforming” team.

Turning Around The USS Santa Fe 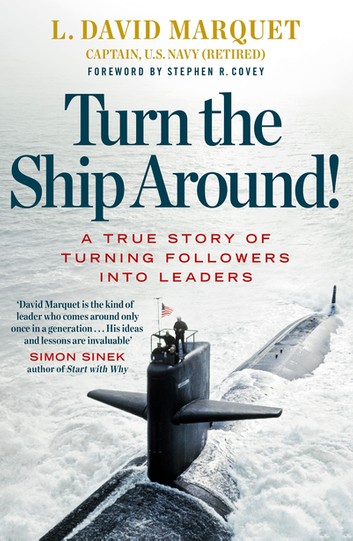 The USS Santa Fe, a nuclear-powered submarine, was infamous for its sub-par performance and crew retention rate. David Marquet, a U.S. Navy Officer captaining the USS Santa Fe, transformed it from being one of the fleet’s worst-performing teams into an efficient and effective team winning it many accolades. Encouraging the members of his team to lead, he empowered his whole team to perform better and succeed, making him a better leader in the process.

For example, he moved the chain of power down the hierarchy to his chiefs. He ended many inefficient and time-consuming processes such as leave approvals that needed sign-offs from three different officers.

With more power and responsibility in hand, the chiefs became more passionate about the performance of their team and boosted the crew’s competence levels. He changed the very structure of leadership using many different mechanisms to bring about a sea change in the functioning and the performance of the team.

How and what did he do to turn the ship around?

A recent Conference Board Survey showed worker satisfaction rates and overall productivity has hit an all-time low. The US economy is facing a leadership crisis.

An age-old organization structure could be the reason for the alarming statistics. As David Marquet shows in the book, the current organizational structure needs to be examined.

Our organizations have used the leader-follower approach right since the times the Pyramids were built in Egypt, through the Industrial Revolution, until today. In this approach, the leader makes the decisions, and these are carried out by the follower. While this structure was suited for work needing physical labor and menial tasks, it does not suit today’s roles that need cognitive and decision-making skills. Today, we need a change in the way we perceive leadership.

The age-old top-down leadership model does not tap into the natural leadership abilities of the workforce. A few simple changes and a re-evaluation of the way we look at leadership will lead to benefits not only for the employees but the organizations too. These changes were applied by David Marquet. And he saw some remarkable changes using his new model – The leader-leader model of leadership.

The leader-leader approach is a radically different outlook on the leadership structure.

To implement the leader-leader approach, the deeply ingrained hierarchical organization structure itself needs change. It means that managers give up some amount of their decision-making control. They need to ensure that decision making involves the employees. David Marquet learned that his chiefs became more passionate about ensuring that their team succeeds and were more concerned about their overall efficiency than before. Simply because he made simple changes to the structure and handed leadership to his subordinates using the leader-leader approach.

This can be done by identifying old processes and ways of doing things in the organization and changing them. Once people start to act differently, they will also start to think differently. For example – David Marquet had everyone inform him of their decisions with the phrase “I intend to…” instead of asking for permission to do something. This way he was aware of what people intend to do.

The Pillars of Competence and Clarity

While giving additional responsibility, managers need to be sure that an employee can rise to the responsibility given. Mechanisms that ensure that the workforce builds and maintains their competence levels need to be used. This will empower them to make good decisions.

Marquet emphasized on constant learning and delegated decision making as tools to improve competence in small steps. Every activity was seen as a chance to learn and do the tasks better. The leaders emphasized this message repeatedly to make sure people don’t revert back to old habits. Keep the communication flowing. Taking deliberate action – making your actions vocal and using gestures to deliberate actions – is one example.

Not only managers have clarity of whether they can hand over more powers to the employees, but also when the employee can handle the task at hand. Leaders on Santa Fe ensured clarity by focussing on achieving excellent results, and not just to play safe and avoid errors. People were encouraged to question their peers and leaders if something was not clear. Everyone had long term goals and a desired end result, and the managers appreciated and recognized good performance whenever they saw it.

These mechanisms can boost employee satisfaction and performance. The successful implementation of the leader-leader structure on the USS Santa Fe produced remarkable results.

This can be done by deriving inspiration from history, through the legacy and the founding story of the company. People need to be appreciated and rewarded for performance.

Applying the leader-leader structure can result in achieving considerable success. And the lessons from the book are applicable to any organization or company.

As David Marquet writes in the book, this new approach is for all those frustrated workers and bosses for whom the current leadership structure just isn’t working. We need to reject leader-follower as a model and view the world as a place for leaders everywhere to achieve this vision.