6 Learnings About Fear From The Fear Factor by Abigail Marsh

Most people look at fear as a negative emotion, as an emotion to overcome. This book looks at the complex role that the emotion ‘fear’ has on us. It looks at the link the emotion fear has with other virtues such as altruism and empathy.

This book delves into concepts such as –

The author Abigail Marsh cites many studies (including her own) that show fear is linked to certain behaviors, and that it can lead to acts of kindness. So how can our fear help us?

1. The link between fear and empathy.

Empathy is the ability of a person to recognize another person’s emotional state.  We naturally perceive others we meet as nice or not. The author discovered that empathy was strongly related to the ability to recognize when others feel fear.

The author cites an experiment conducted by Daniel Batson in 1978 that showed a relation between empathy and altruism, and a person’s ability to recognize fear in others.

2. Physical deficits in the brain affect the emotion (psychopaths and altruists) 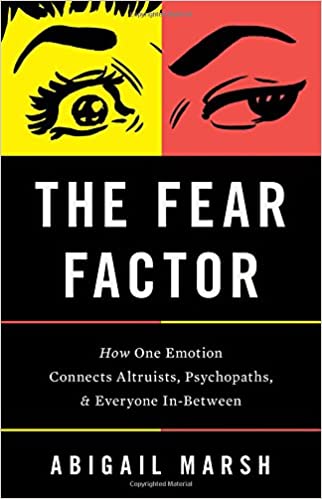 The previous experiment led researchers to believe that fear and empathy are linked to the amygdala, an almond-shaped part of the brain that detects threats and brings about a response to fear. It creates a feeling of anxiety and hyper-awareness, releasing adrenalin into the bloodstream and elevating heart rate and blood pressure.

Case Discussed: Robert Hare, a criminal psychologist interviewed a psychopath. This experiment showed that, an impaired or dysfunctional amygdala restricted the psychopath to experience and identify with fear. This showed that people with damaged amygdala found it difficult to experience fear.

Case discussed: Kidney Donors of the United Network of Organ Sharing. Another case study conducted by the author on anonymous kidney donors showed that the amygdalae of altruistic people work differently in the presence of perceived fear, and they are able to empathize more profoundly with others in distress.

Altruists have a keen sense of recognizing fear in others. However, this doesn’t mean that altruists are less brave or, do not feel fear. In fact, they are normal, but only tend to overrule their fear when needing to help others. Those who can recognize fear well tend to me more altruistic.

The author Abigail Marsh gives the example of the former mayor of Newark, Cory Booker. The recount of his fearless rescue of his neighbor from the fire, while was heroic and brave, was also terrifying for him.

Case discussed: The kidney Donor study also showed that while the donors were not fearless and would avoid risky situations and dangers their empathy was strong enough to help someone. Such altruists also feel excitement or elation while risking themselves to help others.

4. Relationship of hormone Oxytocin and fear

Altruism isn’t seen as a result of the amygdala only. Other hormones in the body such as Oxytocin are also responsible for nurturing behaviors promoting altruism. Oxytocin also plays a part in helping humans identifying fear. However, it also stimulates them to face danger.

Case discussed: 2016 experiment where rats were given small doses of Oxytocin. Due to the hormone, the rats showed physiological signs of fear, but they did not freeze or run away, unlike when they weren’t exposed to oxytocin. This shows that oxytocin stimulates rats to face dangerous situations and help others.

5. Literacy: the key to reducing violence?

Myanmar is at the top of the list of the World Giving Index. Surprisingly, this adds to the fact that Myanmar also has a 90 % literacy rate. The connection lies in literature, enabling an enthusiast to be unbiased while perceiving a story and creating an empathetic connection, working in a similar manner to how the brain works with empathy. This shows that literacy could be the answer to reducing violence world-over.

Case discussed: Daniel Batson’s experiment that shows that empathy can boost cooperation with other individuals, simply by reading.

6. Compassion meditation is a good way to move towards altruism

Altruism is a trait that develops over time and with practice. It can become a long-lasting habit. A small experiment on mother rats shows that once altruistic behavior is experienced, it will eventually become a habit.

The Buddhist practice of compassion meditation helps to develop empathy as a habit, even towards strangers. You can start doing it by focussing your attention on your breathing.

Fear isn’t necessarily a negative emotion. It can bring out positive outcomes in people too. Where absolute lack of fear leads to psychotic behavior, it also enables people to empathize more and promotes altruism. Fear can be harnessed positively by reading positive books, at the same time, altruism can be encouraged by practicing meditation.